A. Python has been chosen for this task primarily because of its versatility and its ability to seamlessly transition from Data Extraction to Data analysis. Packages like Beautiful Soup and Scrappy make data extraction from the web extremely easy while Pandas and Scikit-learn allow quick data analysis and modeling. It is for these reasons that Python has been chosen over R/SAS.
B. The objective of the data analysis is to derive insights for the Telecommunication Company, specifically regarding the churn characteristics of its customers. Key observations regarding the churn behavior of customers can help the company employ tactics/offers to retain customers and hence increase profitability.
C. For the task, we shall be using Logistic Regression, Random Forest algorithms to model the customer data. In addition to this, basic descriptive summaries, correlation matrices, scatter plots will be used to determine the relationship of the independent variables with the dependent Churn variable

Churn with respect to Gender

From the above table, we can observe that gender does not have much predictive power in determining the Churn variable
F. The goal of Data manipulation and preprocessing is to ensure the treatment of missing values and outliers in the data as well as the engineering of new features that can add to the predictive power of models that will be created to predict the Churn variable
G. The phenomenon that is to be predicted is the Churn rate of customers based on customer-level data.
H. The data were checked for the presence of any missing values. Thereafter, the distribution of the numeric variables was checked for the presence of any outliers. We observed that there were no missing values in the dataset. Moreover, for the 3 numeric variables, there weren’t any significant outliers that required the removal of any observations. Therefore, the provided data required minimal data preparation

J. Bivariate Statistics
For the purpose of understanding the relationship between the target variable, Churn, and the independent variables, bivariate statistics were computed. The following are the results for some of the variable combinations checked
Learn more through our logistic regression assignment help. 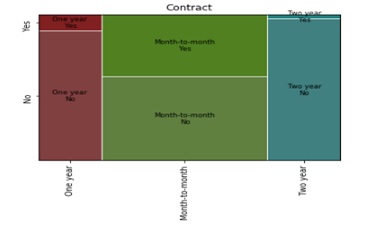 N. Of the models that were trained, the following accuracy values were achieved on the test dataset :
○ Logistic Regression : 0.789
○ Decision Tree: 0.7785
○ Random Forest: 0.7913
With test accuracy scores > 0.75%, we can see that the independent variables hold significant discriminatory power.
Confusion matrix for Random Forest prediction
So we can say that the ability to detect the Churn behavior of customers was present in the provided dataset.
O. Interactions between variables and the dependent variable were primarily detected through bivariate statistics and visualizations and later confirmed using the variable importance feature of Random Forest.
Certain interactions were detected through visualizations that indicated a relationship with the Churn variable. For eg: Contract variable
The mosaic plot showed that people with One-year and Two-year were much less likely churn than customers with the Month-to-Month plan. This suggested that Contracts can be a strong predictor. This was later confirmed through the variable importance plot of the Random Forest model.

As can be seen, the Contract variable is the 4th most important predictor variable as identified by the Random Forest model.
If you are struggling with your regression assignment get quality logistic regression homework help from our experienced experts.