Quantitative analysis is the process of collecting measurable data and evaluating the data. The data can be market shares, revenues, and wages. It helps people understand the performance of their businesses. In the early days, people relied on experience during decision making. However, in the current days, people use quantitative analysis to know performance and make decisions.

There is a high correlation between imports and registered cars, with an increase in the number of registered cars there equates to an increase in import value as the time period heighten from 1992q1 2018 q1.On the contrary, rates display a negative correlation with both new registered cars and imports. Which entirely means for every unit change in either Imports or Registered cars there results in a change in rates in the opposite direction, which has been a trend over the time period on the study?
This assertion can further be evident by the time series graphs below,
Learn more through our quantitative analysis assignment help.
Estimate a regression model of the following form for the period 1992Q1 to 2018Q1:
Regression Statistics
NCARREG= 39302.54+ 14.2145IMPORT-1889.57RATE+78.22917TREND
New registrations of cars change by a unit resulted in a change directly in imports by a factor 14.2145 and trend by 78.23, but inversely with rate by a factor 1889.57.
To improve the model dynamics are introduced. The two variables to explain the car registrations are lagged by 4 periods equivalent to a year. The model to be estimated for the period 1993Q1 to 2018Q1 is now of the form:
Regression Statistics
NCARREG= 49344.56-25.4673IMPORT-2799.19RATE+41.7719TREND
Lagging the period’s results in a relationship where New registrations of cars display an indirect relationship with both import and rate, but a direct relationship with the trend,.
Conduct a model control and investigate for the presence of autocorrelation by use of the Durbin Watson test. Save the residuals from this regression and call this variable RESID. Comment on the sign of the included variables. Assume a 10 percent level of significance. Compare also the model found under question B
The Durbin Watson statistic displays a positive presence of autocorrelation, the similarity between observations as a function of the time lag between them is thus high.
The model can explain variability of up to 67% within the data set compared to the model in B which explained up to 69% of the variability within the data set.
Expand the initial model above to an autoregressive (AR) model of order 4. This is an AR-4 model for the period 1994Q1 to 2018Q1. Estimate a model of the form
SUMMARY OUTPUT
Regression Statistics
NCARREG= 47268.57-58.767 IMPORT-2263.92RATE+113.025TREND+0.368RESID(t-1)+0.0252RESID(t-2)-0.0285RESID(t-3)+0.4759RESID(t-4)

Why is it interesting for this data set to consider a model of order 4 relative to quarterly statistics?

This is because an explanation of high variance in the data can be achieved at 83.84%.
The Durbin Watson statistic displays a positive presence of autocorrelation, the similarity between observations as a function of the time lag between them is thus high.
RESIDUAL PLOT
1E
LNCARREG=9.194577+0.306131LIMPORTS-0.12427LRATE
Save the residuals from this model and call them ECMRESID. Estimate second the short run ECM-model
SUMMARY OUTPUT

Is it true that March, May, and June are special?

What is the outcome? Do we observe interaction or segmentation among the two factors?

Segmentation among the factors is observed this is evident by the p-value of 0.0137, which brings statistical insignificance.

What is the interpretation?

The p values in the table are used to draw conclusions, in the table statistical significance is ascertained based on this, testing for equality of distractive performance is concluded with the p-value in the column of 1.63E-24 which is less than the standardized sig of 0.05.

Which group(s)/segments of countries are of interest with regard to both factors?

The table displays averages of the incidents of distractive performance, the last two segments of countries are of interest when we regard the factors, as attributed to the large mean values of the incidences.

Can ranking be undertaken?

5A
DKINCOME
The data set has a mean of 526.6375, normality of the data is indistinct since the skewness value is high at a positive 2.6742. This further evident by the histogram below which shows the data as skewed to one side. 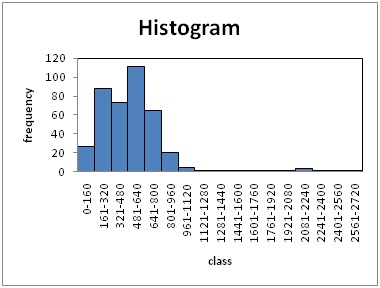 The majority of the data are in the class of 481-640 representing 111, followed by 161-320 at 88, the rest of the distribution was as in the frequency table, highly depicting skewness to the right.
Use descriptive statistics and a discussion of the shape of the samples compared to the distribution of the total data set.
The data set from a simple random sample and total population are positively skewed, with a skewness coefficient of 2.986920769 and 2.674171798 respectively, this is further displayed by the histogram which weighed to the right side. Nonetheless, the sample from the stratified sampling technique exhibits a negative skewness, showing that the majority of the data points are to the left side, the three data sets explained in terms of outliers’ exhibit high outliers for the total population, and the simple random sample as compared to the stratified sampling.
Get a similar solution from our team. We offer quality quantitative analysis homework help.